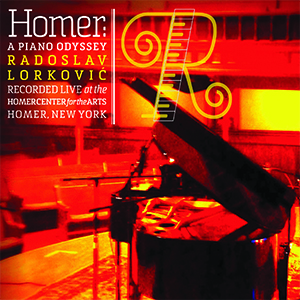 Well, it’s here. A new new CD. I honestly cannot get past the cover. I can’t stop looking at it. The design was done by the incomparable Bryan Peterson. If they had a album cover Olympics he would be swimming in gold medals. This a live recording. I’ve been waiting for this one a long time. I have stacks of discs sent to me by sound engineers. Most are quite good. Something just falls short… Upon entering the stunningly beautiful Center for the Arts in Homer NY, I knew, then, something was different.

I immediately started snapping photos knowing the evening could lead to “the one” live recording. Then I sat at the piano, The amazingly colored stained glass reflected on its finish. I did my usual warm up of bits featuring snippets of Mozart and Bach (clams and all) and an occasional blues riff utilized in a “kick the tires” sort of way. I noticed a gentleman was already recording me. Ray Ackerman had placed mics strategically around the piano and the vocal mic was placed perfectly in advance. He quietly dialed levels as I happily played. The extraordinary concert grand piano resonated in a manner suggesting the concert hall had been acoustically engineered around it.

At this point I knew this would lead to the live recording I had hoped for for years.

And it is finished. I picked the obvious classical theme. “Homer: a Piano Odyssey.” I am quickly scrambling now to live up to such a title. I am halfway through reading James Joyce’s “Ulysses.” I plan to follow with Homers original epic. I may not go as far as learning Classical Greek. During the show, in the midst of the many strange tales I weave, I mistakenly referred to “Jason and the Argonauts.” Then I launched into a song. A classical lit buff at this point will be thinking: “What a moron!” I catch my errant ways immediately following the song and make good humorous hay of it while getting a sigh of relief from my remarkably educated audience. I asked: what was the objective of the Odyssey. Someone shouts out: “To come home!” “Home to Homer! I get it!” I said.

This recording successfully accomplishes the odyssey I have set out on far more than 20 years ago. It truly captures what I do. I play piano, accordion, sing, write songs, tell tales but most importantly: during every performance, I take my audience on a musical and verbal adventure. Enjoy my personal 35 year musical odyssey captured in a seventy minute performance.

Homer: A Piano Odyssey was recorded at The Center for the Arts in Homer, NY on October 18, 2012. It will be released September 3, 2013 and will be available at iTunes, Google Play, CDBaby, and Amazon. Pre-release copies are available at live shows or on Bandcamp.